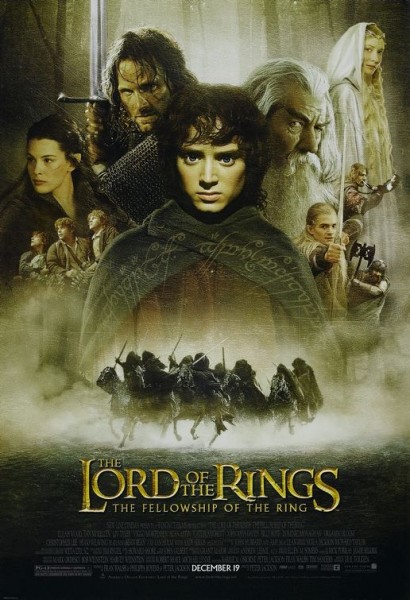 Power corrupts. Absolute power corrupts absolutely. This is an old adage that has been the basis for many a story. It is the primary plot device behind John Tolkien's The Lord of the Rings classic. Written in 1954-55, with origins dating back to 1937, the first of the three movie installments, which have already been filmed, tries to stay true to the mystical world present in the book. The resulting effort is a definite success.
The star of the story, and the film, is not a person, but an object, a ring. The ring allows one to control a host of other rings handed down to the different peoples of Middle Earth: three rings belong to the immortal elves; seven to the dwarfs; and nine rings to mortal humans. The ring that rules all the others, forged using the fires of Mount Doom by the evil Wizard Sauron (Sala Baker), gives its holder so much power that it corrupts all those who seek to wear it, even the purest.
Of course, there are some peoples that are more pure than others. Humans generally seem incapable of wearing it without being corrupted by its influence (no surprise there). But there exists a diminutive people, the Hobbits, who do seem at least capable of carrying it without being polluted too much. It falls upon one Hobbit, Frodo Baggins (Elijah Wood), to take the ring to Mt. Doom, which is the only place where it can be destroyed.
Frodo is aided in his quest by the wizard Gandalf (Ian McKellen), the elf Legolas Greenleaf (Armando Bloom), the dwarf Gimli (John Rhys-Davies), two humans Strider aka Aragorn (Viggo Mortensen) and Boromir (Sean Bean), and three other Hobbits including Frodo's friend Samwise Gamgee (Sean Astin). The story chronicles how Frodo, being a reluctant hero, travels through mysterious and dangerous lands of breathtaking beauty, and fights terrific monsters in the context of awesome towers and citadels, to achieve his goal.
Perhaps one of the most visionary aspects about Tolkien's work is how he set the stage for a Dungeons and Dragons style video-game. Director Peter Jackson imbibes to the film the same feel present the book, in terms of traversing a diverse variety of landscapes, while encountering a diverse variety of creatures, friend and foe alike. Watching the film, it's easy to become mesmerised by the fantasy that is unfolding purely based on the cinematography.
Like with Joanne Rowling's Harry Potter (or for that matter, Stephen King's It), this film does not live up what I imagined, but it does a great job of presenting what Jackson and his co-workers imagined. The special effects are spectacular and meticulously done, perhaps even better than those observed in Harry Potter. There are no cop-outs here and every place that it matters, the effort and the expense have been evidently put in. The soundtrack sometimes overwhelms the dialogue, of which there is a lot, interspersed between the action sequences. Do not miss seeing this on the big screen. This is how movies should be made.
Source
Share this article :
Labels: action, best sellers, box office, hot movie, review

your Article is this very helpful thanks for sharing...!!!