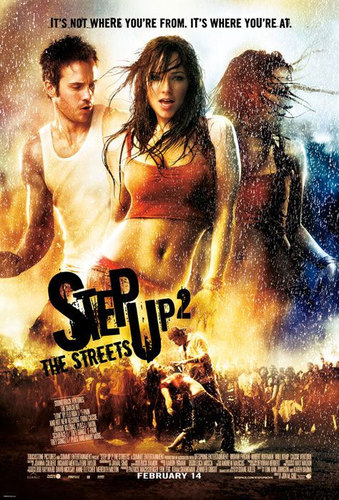 I went to the special premiere screening of Step Up 2 coincidentally with all the Top 12 finalists from So You Think You Can Dance (Australia) and honestly it was one of the WORST movies I've ever seen, hands down the WORST dance movie I've ever seen that it's the type of movie only worth downloading and watching from your computer. Or even just cut scenes from Youtube. That's because you can skip all the talking BS and go straight to the mediocre and overdramatized dance sequences which is probably the only reason people go to watch it anyway.
Ok, so I'm probably not the target audience. I'm a street dancer and as my fellow crew member Chux would say, "You're not a street dancer, if you're not on the street." Maybe I just had higher expectations, considering Jabbawockeez were involved, and their 30 second spot was the best part of the film. That, and Chase's (Robert Hoffman, You Got Served) freestyle solo in class.
The lead actors were dull and plain, lacking the street cred they claim in the film. There was so much cleavage or stomach being shown but at least it distracted me from the crap talking (and I don't mean the amusing type of crap). And Cassie, her role was so useless, she would've been better if her character was the evil bitch ex-girlfriend of the popular guy, or maybe they could've scrapped her altogether from the film, it prolly wouldn't have made a difference. Storyline? What storyline?
There were around 3 main dancing scenes, the first with the trampolines was not all that impressive, and the ending was a piece of crap. They took Omarion's rain scene from You Got Served, added a lot more people and a lot more rain and a longer routine. Sure, the dancing was cool but it wasn't all that fresh. I've seen much better on the streets and battlegrounds of Sydney.
I think watching America's Best Dance Crew and the 360 Crew Freestyle Battles a few weeks ago, set my standards for the dancing in this movie, so it's not so bad to those who don't watch a lot of live freestyle dance battles or street group showcases (i.e. Kabamodern and Jabbawockeez - youtube them!)
So just because I really disliked it doesn't mean I'm going to advise other people not to watch it because F*** you are all capable of making your own decisions and I encourage that. I actually thought the first one was alright, and it sh*ts all over this one.
Source
Share this article :
Labels: drama, review, youth

Not all are true. Everyone has their own way of thinking but I think they have to reconsider. I like to argue for the most accurate results.
http://fivenightsatfreddysplay.com

Top 7 reasons why casino for real money became very popular among players from all over the world. Play to win real cash prizes easy.