The Taking of Pelham 123 : movie review 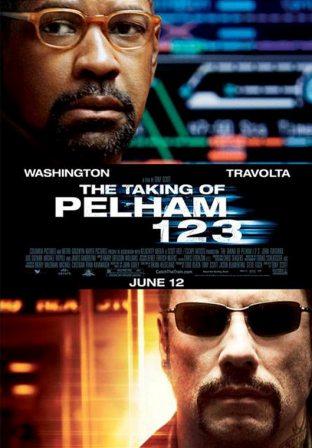 The Taking of Pelham 1 2 3 Is a New thriller starring Denzel Washington and John Travolta directed by Tony Scott shot in the subways of New York City. The story starts as a man who calls himself "Ryder," (John Travolta) leads a band of thugs as they highjack a subway train and MTA dispatcher Walter Garber (Denzel Washington) who is Reluctantly forced to be the Lead negotiator.
movie review The Taking of Pelham 123
This Film is a remake of a 1974 movie of the same name and reworked to meet a new audience. With modern dialog and cell phones, laptop computers and of course the fact that 911 effects the city still, this film was a really fast pace based roughly on the old plot. There are some wild scenes in this movie of New York City as the Mayor, (James Gandolfini) agrees to pay a $10 million ransom and they try to get the money across the city to the subway station. If nothing else is worth the price of admission to see James Gandolfini, Tony Soprano as mayor of New York it’s so cool. Denzel Washington and John Travolta work wel together and their voices are what id cool to have to big name actors in a dialog driven story about two characters that interact over a radio on the subway car. This film was made for a younger audience and I think that those are ones that do go to the movies regularly.
I think my fellow Critics just didn’t get that part of the puzzle, that this film was made with the 17-27ish age group in mind, so it’s fast cuts and rough, realistic dialog. What would a career family man with a Wife and kids and an ex-con straight out of prison talk like, what would the banter be? I think the writers nailed it dead on and the two main actors and Gandolfini included deliver the lines flawlessly. Also, the fact that this film has scenes filmed on the streets of New York to would in my opinion must have been a logistical nightmare and an undertaking that is in itself a commendable feat. This film also has some great editing and that’s often overlooked, editor Chris Lebenzon stitches together a compelling series of images that suck you in, and work well with the Music by Harry Gregson-Williams. This is a good film, not a great film and it overcomes a story that is antiquated, and turns it into a new and improved version that is engaging to watch.
Directed by Tony Scott
Produced by Tony Scott, Todd Black, Jason Blumenthal, Steve Tisch
Written by Screenplay: Brian Helgeland, David Koepp (uncredited),
Novel: Morton Freedgood
Starring Denzel Washington, John Travolta, James Gandolfini, Luis Guzman, John Turturro, Gbenga Akinnagbe, Frank Wood
Music by Harry Gregson-Williams
Cinematography Tobias A. Schliessler
Editing by Chris Lebenzon
Studio Relativity Media, Scott Free Productions,Escape Artists
Distributed by Columbia Pictures, Metro-Goldwyn-Mayer

Thanks for review, it was excellent and very informative.
thank you :)